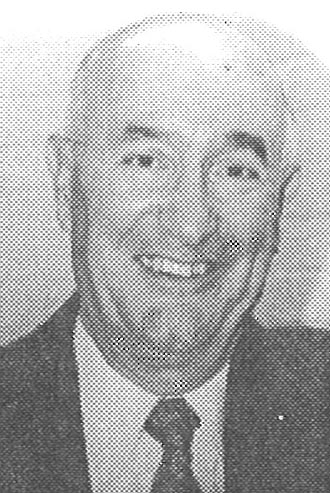 Richard Nasser graduated from Montrose High School in 1948. In interscholastic sports he lettered in baseball, volleyball, track, and basketball where he was on the All-Star team. He was selected as the “Most Athletic” member of the class.

Richard enlisted in the Marine Corps in 1949 and was in the Korean Conflict. While in the service, he played second base for the base’s baseball team. He was discharged in 1952 with the rank of Sergeant.

He graduated from Millersville State University in January, 1957, with a B.S. in Industrial Arts.

Richard began employment with Elk Lake School District as Industrial Arts teacher in January, 1957. He also attended New York State University at Oneonta and graduated  in 1969 with a Masters Degree in Guidance. He was appointed Guidance Director at Elk Lake until his retirement in 1996. While at Elk Lake, he coached junior varsity basketball, was assistant varsity basketball coach from 1878-82, and they were runner-up PA State Champions in 1981, coached the boys varsity baseball from 1962-82. Under Richard’s coaching, they won 15 league championships, 9 district championships, and had a record of 243 wins and 49 losses. He was also the NAC baseball chairperson.

Richard is one of the most respected coaches and athletic people in Susquehanna County. His community activities include Little League Baseball coach for 6 years, Past President of the Montrose High School Alumni Association, and Board of Directors of Montrose High School for 6 years. He is an NEA Life Member, and belongs to the PSEA and the Pa. Assoc. School Retirees organization. He is still active in working with area youngsters.

He is also active in area organizations and has served as Selective Service Board Member (Draft Board), and was chairman of the Cancer Society Drive. He belongs to the Masonic Temple, Warren Lodge 240, Warren Royal Arch Chapter, and Nazarene Commandry Knights Templer 099.

He also belongs to the American Legion and is a charter member of the South Montrose Conservation Club.

Richard is married to the former Carole Davis, and they have five children, Thomas, William, Susan, Linda, and Ellen, and eight grandchildren.