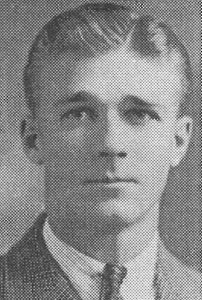 In 1938, Couglin High School’s football team won the Wyoming Valley Championship with a perfect 10-win season, scoring 229 points, led by Joe Cunningham, the two-time all-scholastic and all-state halfback. Joe, one of the smallest halfbacks ever to play in Wyoming Valley was 5’7″ and 138 pounds. Joe also participated in varsity basketball and baseball, receiving 12 varsity letters in his 4 years at Coughlin, the most any athlete can earn.

The late Bob Patton of the Times Leader, and also a member of the N.E. Region Hall of Fame, Luzerne County Chapter, wrote, “Joe’s speed and agility enabled him to write one of the most impressive chapters in Coughlin High School’s sporting history. Joe did it all; he was the best running back I ever saw since I became a sports writer.”

Joe’s abilities did not stop there; he was the team’s leading passer and also handled all the kicking duties. Joe also played defense on a team that only allowed 33 points in 10 games (3.3 points per game). That year, Coughlin played G.A.R. High School in a raging rainstorm and Joe scored all of Coughlin’s 45 points before the game was called off at half-time. That year, Cunningham scored a total of 30 touchdowns (for a total of 49 touchdowns during his career at Coughlin), both running and passing, and also kicked all the extra points.

Jim Moran, also a member of the Hall of Fame, said, “In all my years of playing and coaching football, I have never seen a better all around football player than Joe Cunningham. In my honest opinion, he was the best halfback to ever play in Wyoming Valley’s history.”

James “Red” Pendergast, Joe’s coach and another member of the Hall of Fame, was quoted as saying, “I think Joe Cunningham is the greatest running back ever to play football in Wyoming Valley. He has more natural ability and God-given talent than anyone I coached with or against.” The tragedy was Joe’s legend was overlooked and badly hurt by a newspaper strike that took place those years, taking some glory and well-deserved publicity from his achievements.

Joe attended Pennington Prep School in New Jersey, then Lasalle Prep in the fall of 1941. Joe attended Mansfield State Teacher’s College with his brother Bernie, who was recently named to the Hall of Fame at Mansfield, until his enlistment into the Air Force following the attack on Pearl Harbor.

Joe received the Bronze Star, the Distinguished Unit Badge, and the Good Conduct Medal, achieving the rank of Staff Sergeant. He worked at King’s College for years prior to his death in the early 1970’s. In addition to his brother Bernie, he is survived by three sisters and a son, Michael, and a daughter, Colleen.