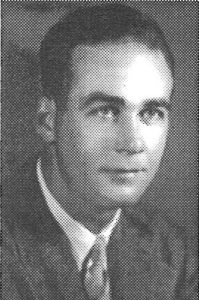 Bernie excelled in football, basketball, and track at Coughlin High School in Wilkes-Barre. He earned 9 varsity letters in these sports and captained Coughlin’s 1933 undefeated football team. He was named to the All-Conference Team as well as All-State. He also was the Wyoming Valley’s best punter during his three years on the team. In basket-ball, he was the league’s leading rebounder. In track, he set a discus record that held for more than ten years with a throw of more than 140 feet. Bernie and his brother Joe, who is also being inducted tonight, were great athletes at Coughlin, both winning championships in football in 1933 and 1938 respectively.

Bernie graduated from Mansfield State College in 1940 with a degree in English. He played football, basketball, and baseball at Mansfield. His biggest college achievement in sports was as starting end and punter on the 1939 State Teacher’s College Championship Football Team, where he set a state punting record at 58.1 yards. For over 20 games, he played both offense and defense, with Mansfield only giving up 2 points all season. Bernie was elected to Mansfield’s Sports Hall of Fame in 1995.

After graduation in 1940, Bernie became the Mansfield line football coach for 2 years, before enlisting in the Navy during World War II. He was discharged as a lieutenant 4 years later, after serving on the USS Langley. He also coached the basketball team at Anacostia Air Force Base in Washington, D.C., where they won the District Service Championship.

Bernie then resumed his teaching and coaching career in Chicago at St. Mel’s High School. He later coached and taught at Chicago’s Latin School for Boys, where he was Athletic Director and head coach for football, basketball, and baseball.

After spending 10 years in Chicago area schools, Bernie moved to Neptune High School in New Jersey as English teacher and football line coach. He was chairman of the English Department and coached football for 20 years.

Bernie is married to Rita McDermott of Chicago, and they live in Brick Twp. New Jersey with their sons.