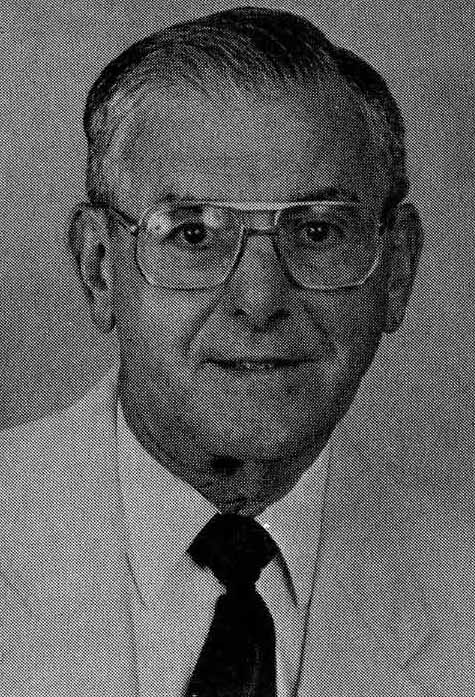 John Joseph O’Malley was born in Pittston, Pa., April 15, 1922. Retired March 28, 1991, after a 44-year career in newspaper work, a major portion of it in cover-age of regional sports activities. Education: Graduate of St. John’s High School, 1939. Attended University of Scranton in 1945 and 1946. Graduate of St. John’s Business School, 1947. Military service: Served with the U.S. Army from 1943 to 1945 in the 92nd Chemical Warfare Battalion in the European Theater of Operations, and received five battle stars for campaigns from Normandy to Germany, and the Silver Star Medal for gallantry in action in the Battle of the Bulge. Employment: Lehigh Valley Railroad in the Maintenance of Way Department in 1942 and 1943. Joined the Sunday Dispatch in Pittston in 1947 as the sports editor, and held that position from 1947 to 1962 with the emphasis on coverage of scholastic sports, Little League, Teeners League, American Legion, and Sunday baseball, and was president of the Suburban Baseball League in Greater Pittston a number of years, and played and helped organize what is presently the Slow Pitch Softball League of Greater Pittston. Joined the staff of the Wilkes-Bane Record in 1962 and worked in all editorial departments including national, state and sports news. When the Citizens’ Voice was founded in 1978, he was the national news editor and served in that capacity until his retirement in 1991. He wrote a weekly column on road running, scholastic track and field and cross country. Through the years he served as toastmaster at many high school sports banquets, and as the master of ceremonies at the annual Hughestown Sports Club dinners, which attracted some of the top celebrities in collegiate and professional sports, and honored the outstanding regional high school athletes in all fields of sports. Served as master of ceremonies at numerous Little League opening day programs throughout the Greater Pittston area, and was one of the original group which started the Pittston Little League. An active member of the Wyoming Valley Striders and the Scranton Organization of Area Runners (SOAR) and ran the Berwick Marathon at the age of 65. Have always felt particularly proud of the fact that many of the youngsters whom he had publicized for their participation in regional sports from Little League right on through their scholastic careers benefited from the publicity by receiving valuable collegiate scholarships, and in many cases, professional contracts. He is married to the former Patricia Leonard, R.N. The O’Malley’s are the parents of five children: John J. O’Malley, Mrs. Thomas (Mary). Finnerty, Mrs. Mark (Kathy) Ercolani, Patrick O’Malley, and Michale O’Malley. They also have seven grandchildren: Kevin, Thomas, Meghan, and Patrick Finnerty. Jason, Kelly Newcomb, and Patrick O’Malley.