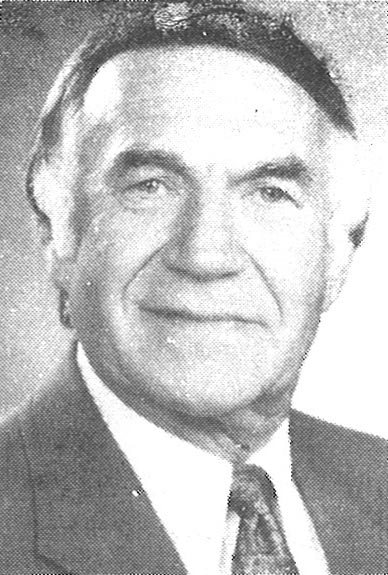 Joe Barkocy made All-Regional first team as an offensive and defensive end at Hazleton High in 1948. The Mountaineers finished 10-2 that season and Barkocy was able to play all eleven positions when needed for Coach George Kavel. He also lettered in football in his junior year, getting a starting position midway through the season as a running guard. Joe, a member of a large family of ten children, was only ten years old when his father was killed in a coal mine accident. Former Hazleton High athletes George Kracum and Red Durishin, who became standout players at the University of Pittsburgh, as well as teammate Joe Dudeck, an all-stater and All-American at North Carolina, inspired him to play the game and play it well. Joe Bonacci, who lettered in four sports at Hazleton High, was his mentor. He urged him to play football in junior high school, and Franklin Penn, a trainer and sports personality in the Hazleton School District, was also instrumental in urging Barkocy to achieve excellence in sports. After studying many offers, Barkocy decided to continue his athletic career at Wake Forest on an athletic scholarship. He was red-shirted for one year but then lettered four years and before his career ended at Wake Forest, he played defensive and offensive end, running guard and tackle, although he specialized in playing defensive end. Wake Forest was in the nation’s top ten in 1949 with an 8-2 record and 9-1 the following year under the coaching of Peahead Walker. During that period, one of the losses was to SMU, with Doak Walker and Kyle Rote, by one point. Many great athletes were at Wake Forest during that time, including golfer Arnold Palmer, who roomed next door to Barkocy for four years. Ironically, Wake Forest defeated North Carolina all four years Barkocy and former teammate Dudeck met on the gridiron. Barkocy next chose to go to law school, which he did for one year, but Tom Rogers, an assistant coach at Wake Forest, got him interested in coaching. “Tom Rogers was a surrogate father to me,” Barkocy said. After serving as an assistant coach under Rogers for a year, Barkocy knew he wanted to coach and he turned to the high school ranks in Butler, New Jersey. His teams there were powerhouses for four years. He then switched to Wayne, N.J. High, a doormat for years. He was named “Coach of the Year” when he turned a 1-9 team into an 8-2 team in one season. After eight years of success at Wayne, he coached his last twenty-two years at Ridgewood, N.J. High School. Ridgewood was rated one of the top five academic institutions in the country and Barkocy proved that intelligent students are also accomplished athletes by turning out a succession of excellent teams. He retired from teaching and coaching in 1986 and is in the construction business and still working with young people. In total, he taught thirty-three years and coached twenty-five years. He specialized in recommending players with good potential to college recruiters and a long list of the athletes he recommended played well in college. Several made it to the NFL and had outstanding careers. He and his wife Carolyn have four children, three boys who are all-state skiers, and a daughter who holds records in skiing and volleyball. All four children are outstanding soccer players. Both he and his wife are Canadian-American certified ski instructors. They met as students at Wake Forest. They have twelve grandchildren and one on the way. They reside in Warwick, New York.