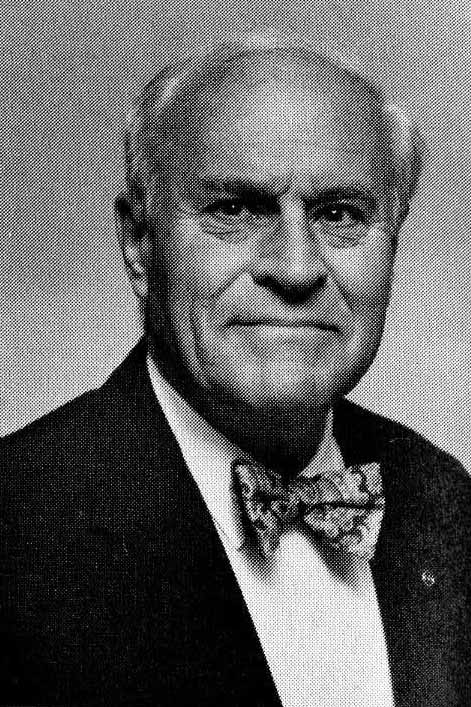 A native of the Shenandoah Valley of Virginia, George Ralston has spent nearly his whole adult life in the Wyoming Valley—at Wilkes University. In 1986, after 40 years of service, Wilkes recognized him as Dean Emeritus and he currently serves in his forty-sixth year at Wilkes as an assistant in the Alumni Office. Ralston is a graduate of Susquehanna Township High School in Harrisburg, Pa. He was president of his class, captain of the football and baseball teams, and was an “All Dauphin County” team selection in both sports. In 1936, Ralston entered the University of North Carolina at Chapel Hill. He was a pre_ med major and lettered three years in both football and baseball. In his senior year, Ralston was cited for having the highest academic average among athletes. He was also awarded the two highest honorary awards at the University—membership in the “Order of tile Golden Fleece,” and the “Holy Grail Society.” He graduated with honors in June of 1940 from the University of North Carolina and that fall he accepted a teaching and coaching position at Forty Fort High School. In 1941 after one year coaching football and basketball and teaching English, he was an early draftee into the Army during World War II. He served as an antiaircraft artillery officer in the North African campaign, rotated back to the United States in late 1943, and then served in the Pacific Theater until the war ended while he returned in February, 1946. June 1, 1946 marked the beginning of a long, arduous, albeit beautiful career, at what first was Bucknell University Junior College, then Wilkes College, now Wilkes University, spanning more than four decades. Dean Ralston became a member of a small team of educators who initiated most of what Wilkes is today. For almost two decades his duties were mostly in athletics. Then came a decade of academic and administrative responsibility with his final years mainly given to student personnel administration. Ralston organized the first Wilkes football team, and was the only coach in those early years. In addition to coaching three sports and directing the initial athletic program, he was Dean of Men, Dormitory Residence Director, Student Activities Director, and part-time instructor in the Biology Department. A man for all seasons at Wilkes. Ralston’s first football team was undefeated and untied. The squad was endowed with talented G.I.’s, many of whom had been “All Scholastics” in Wyoming Valley. This roster of athletes played together for four years at BUJC and Wilkes, and in 1949 scored the most points in Pennsylvania Collegiate Football. At Wilkes, Ralston coached football for ten years, baseball four years, and basketball nine years. He was Director of Athletics for 14 years, and in addition to assigned athletic duties, he was responsible for the Wilkes Holiday Open Wrestling Tourney, “The Rose Bowl of Wrestling,” an athletic endeavor of national renown, which he chaired for 38 years. As a tribute to his leadership role in athletics at Wilkes, the University in 1965 named its stadium “Ralston Field.” Through the years he pursued graduate studies at Harvard and Columbia Universities. Ralston married Helen Bitler Hawkins of the Wilkes music faculty. They have four sons, all Wilkes graduates.