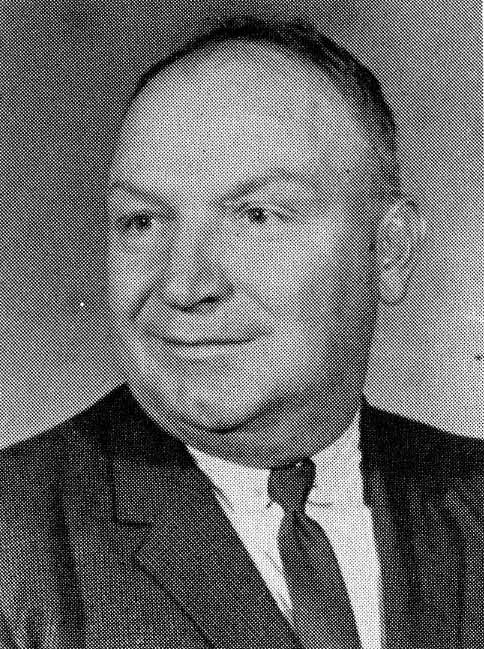 John B. Cimakasky was born in and also grew up in Duryea, Pennsylvania. He graduated from Duryea High School in 1934 after completing four years of varsity football, as well as four years of varsity baseball. Receiving a full football scholar-ship from Scranton University, John started at fullback for four years under Coach Davies and received the title All-American as a special recognition in his senior year. John graduated from Scranton University with a Bachelor of Arts degree and went on to continue his education at both East Stroudsburg State Teachers College and New York University, where he received his Master’s degree in physical education and supervision and administration. In 1940, John began his teaching career at West Wyoming High School where he coached football, track, and basketball until 1943. Some of John’s memorable students in this time period were Warren Lahr, Cas Ostrowski, and Ed Booth. John moved on to Edwardsville High School in 1943 where he taught physical education and coached football, basketball, and track for the next twenty-five years. While at Edwardsville High School, he coached two champion football teams as well as two champion basketball teams. Some outstanding players of this era were Ray Tamales, Walt Luzetski, the Price brothers, the Kulakowski brothers, Bill Eschok, Ray Kachinskas, Joe Belinski, Ray Yatsko, the Kovalski brothers, Bill Simonovich, and Jerry Natishan. John was also instrumental in obtaining full athletic scholarships for many of the following players: Ron Jenkins, Ray Wilson, A. Jones, and J. Watson. Not content to coach and teach, John also involved himself in the officiating aspect of sports. For twenty-five years John officiated PIAA contests in football, basketball, and track and, at the time of his death, was one of the few certified PIAA officials in soccer. He was recognized for his many contributions to high school athletics by being awarded a Gold Badge from the PIAA. This allowed him to attend, free of charge, any contest or program governed by the PIAA. John was also involved in physical education during World War II at Fort Lewis, Washington, where he was Physical Director of Rehabilitation. He served in a similar capacity at Camp Edwards in Massachusetts. In addition, John played professional football for the Philadelphia Eagles in 1940 where he played both offense and defense. John Cimakasky died on October 15, 1968, just before he was to attend a PIAA meeting and banquet. At the time of his death he was two days short of his fifty-second birthday.