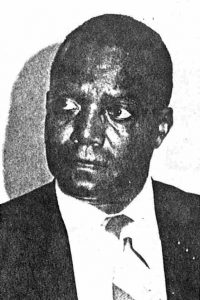 Ben Johnson was once labeled “the world’s fastest human.” Introduced to track and field at Plymouth High School, Johnson went on to shatter the Pennsylvania state scholastic dash records by winning state titles in the 100 yards (9.8) and 220 yards (21.4) dashes. He also won the state long jump title. He held district 100 yard records in 1931-32-33 and was a state PIAA Champion in 1932. After graduation, Johnson continued his education and track and field career at Columbia University.

In 1934, Johnson beat Ralph Metcalfe of Marquette University, a world record-holder and eventual Olympian, in the 100-yard dash, at the National indoor Amateur Athletic Union’s 60-meter semifinal and clocked a 49-second quarter on the mile relay that won the Penn Relays’ freshman race.  Impressed by the feat, national sportswriters, nicknamed Ben “The Columbia Comet.” The very next year, Johnson again beat Metcalfe, Eulace Peacock, and the famed Jesse Owens for the Indoor AAU 60 meter championship, matching Owens’ record of 6.6 seconds in the process.

Johnson was to compete at the 1936 Olympics in Berlin, but injury prevented him from participating in the trials. As history states, Jesse Owens became the hero of those Olympic games. A year later,  Johnson proved himself a track and field sensation, winning AAU and IC4A titles, along with the NCAA 220 yard championship with a speedy 21.3 second effort. At the IC4A meet he became the first athlete in the 20th century to win three events, the 100, the 220, and the broad jump. On the international level, despite missing the Olympics, Johnson won 11 of 12 races in world record pace. His finest performance in his senior season was at the 1938 Millrose Games in Madison Square Garden. He ran the 60 meter dash in 6.2, 6.3 and 6.0 tying the world record, and then broke it twice. One report claimed he actually had run 5.9, but the claim was dismissed because timers believed that no human could run that fast.

Following graduation, in the absence of professional track and field, Johnson became a teacher and coach at Bordentown Manual Training School for a few years before enlisting in the Army in 1942. His noted career ended with his retirement as one of the nation’s first black colonels in 1968. For the next decade he served as an affirmative action officer in the State of Pennsylvania’s Department of Public Welfare and remained an active member of both the YMCA and the Urban League. He has been inducted into the Wyoming Valley Sports Hall of Fame, The Luzerne County Sports Hall of Fame, and Columbia University’s Athletic Hall of Fame. Ben passed away a week before Christmas in 1992.