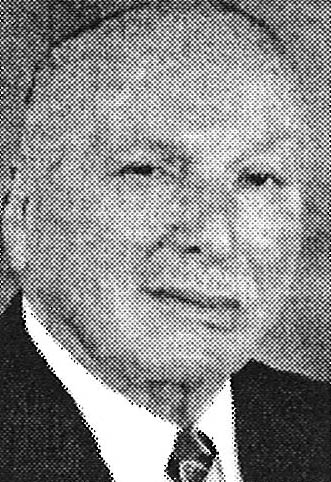 Bob Klenk graduated in 1937 from Olney High School, Philadelphia. For the next two years, he attended Mastbaum Vocational School, playing varsity basketball. In 1942, he joined the U.S. Coast Guard serving at sea in the Atlantic Theatre. In 1944, he was starting forward on the Coast Guard New Jersey championship basketball team. Bob then played football for St. Olaf College, Northfield, Minnesota, as a Navy V-5 Flight Training candidate. Following those 4 years of service in World War II, he entered East Stroudsburg State Teachers College in 1946, graduating with honors in 1950. He and Miriam Seager of Lebanon, Pa., were married in 1948. She graduated ESSTC in 1949 and later taught and coached all-girls athletics at Blue Ridge High School for 25 years. Bob and Mimi came to northeastern Pennsylvania in 1950, with Bob teaching physical education and coaching at Harford High School. Earning his Masters Degree in Educational Administration from Penn State University in 1956, Bob was elected principal and athletic director of the new Mountain View High School. He held that position until 1976 when he transferred to Mountain View Elementary principal. In 1981 he retired from active school duties after 31 years as teacher, coach, and administrator. During his school career, Bob became secretary-treasurer of District 12 PIAA for 7 years, and was elected chairman of District 12 in 1969. He served in that capacity for 10 years, attending all meetings of the State Board of Control. Duties included administering all District 12 athletics. In addition to his regular school duties, Bob has participated in many community activities. He has been associated with the Scranton-Pocono Girl Scout Council as a member of their Board of Directors, along with many committees. He worked as treasurer of the Harford Congregational Church for 25 years. A Paul Harris Rotarian with the New Milford Area Rotary Club, he administers the Foreign Student Exchange Program and the Rotary Leaders Camp Program for high school students. Since retirement, he has been a director on the boards of the Pocono Environmental Education Center and the Farview State Hospital at Waymart. Bob continues to work for the Pennsylvania Association of School Retirees, having served as Region III (12 counties) director and member of the PASR State Board of Directors. The Klenks have one daughter and three sons, Susan, Bob Jr., Scott and Jeff. They have five grandchildren, Matt, Katie, Nicole, Jonathan, and Emilie.