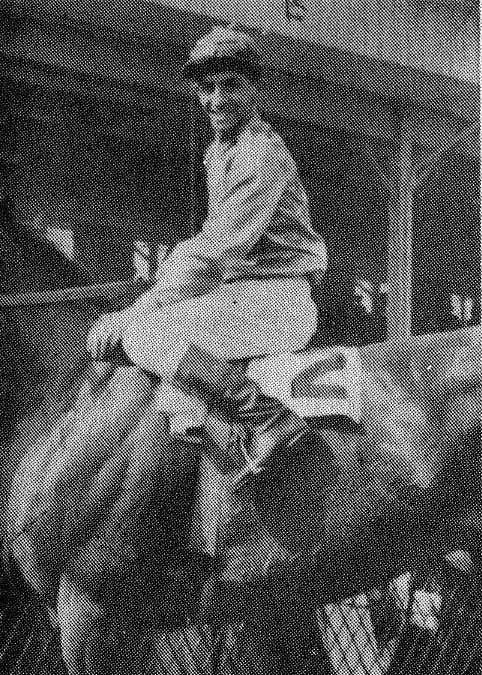 Joseph Reino was born in Luzerne, Pa. He rode high in the saddle. His first flirtation with racing came when he and his brothers built a soap box and entered a derby in his home town of Luzerne. Joe won that race and went on to win in Hazleton and Wilkes-Barre. Joe never showed much interest for horses until a horse owner named “Shorty” Prichard entered one of his horses to race at the Bloomsburg Fair. Shorty was looking for a jockey, when some-one told him about a small, gutsy kid from Luzerne, who would be perfect for the job. Reino rode that horse to a third place finish, and that was the beginning of his jockey career. He first went to a track in Charlestown, West Virginia, with jockey Billy Kelly. He got a job cleaning stables and then working out horses for several trainers. Finally, after a year and a move to Belmont Race Track in New York, Joe got his first mount from trainer Max Hirsh, who trained Triple Crown winner Assault. In his first race on a horse named “Russia,” Joe finished third. In his desire for more races, Reino changed his contract to another stable, which gave him better exposure. Soon he was riding on tracks like Narragansett, Nottingham, Pimlico, and he became the leading rider at Suffolk Downs. He went on to win 238 races in his career as a jockey and continued his life in racing as a trainer, agent, and valet, before retiring in 1988. Joe Reino has heard the sound of thousands of thundering hooves in his life-time. Among them was the great Triple Crown winner, Secretariat. And among the riders for whom he worked were Willie Shoemaker, one of horse racing’s finest jockeys who recently retired with 8,000 wins in 41 years of racing. Reino worked for riders who cumulatively won 11 Kentucky Derbys. Among his favorites were Steve Brooks, Angel Cordero, Fernando Toro, and Jorge Velasquez. But Shoemaker always was the most special. In his involvement with horse racing, Reino worked for, rode against, and mingled with an assortment of celebrities. He rode alongside Eddie Arcaro, one of the top riders in the 1950’s, who won five Kentucky Derbys and two Triple Crowns. Many of the track’s horse owners were famous for other occupations, including the Vanderbilts, Elizabeth Arden, and Arthur Godfrey, who once paid $72,000 for a yearling at Saratoga Springs in 1950, then a record sum of money for a horse. Reino is convinced that Godfrey’s big buy started a trend of high-dollar bidding for exceptional horses. Joe retired to North Carolina with his family, but still returns to Wyoming Valley to visit his brothers, who still reside in Luzerne.