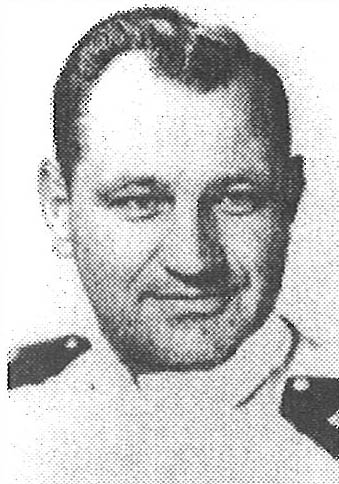 A 1946 graduate of Luzerne High School, a 1948 graduate of Wyoming Seminary, and a standout football player and wrestler at Michigan State from 1948 to 1952, Kapral would eventually go on to a 26-year career as instructor, coach, and ultimately business manager of athletics at the U.S. Coast Guard Academy at New London, Connecticut. Along the way, Kapral saw service as an offensive guard on two powerhouse Michigan State foot-ball teams, finishing 8-1, and 7th nationally, in 1950, and even more impressive 9-0, and 2nd in the nation, in 1951. This led to his participation in the post-season football classic Blue-Gray game at Mont-gomery, Alabama, where he was captain of the Blue Team, and subsequent selection to the All-Time Blue Team. Among his many honors was being named All-Midwest Guard and Honorable Mention All-America in 1951, the aforementioned selection to the All-Time Blue Team, and the Potsy Ross Scholar-Athlete trophy awarded to the Michigan State football player who had the highest academic average. Following college, Kapral was drafted by the Green Bay Packers. He played with them briefly, but was forced to leave, as he was called to active duty as a 2nd lieutenant in the U.S. Army during the Korean War. Kapral also enjoyed impressive success as a wrestler at Michigan State for three of his four years, becoming Michigan AAU Heavyweight Champ in 1950, and 4th place in the National AAU 191 lb. class. After his military service, he elected to concentrate on coaching football and wrestling, as a head coach, first at 2 Michigan high schools, then Dartmouth College, and finally, finding a home at the U.S. Coast Guard Academy. In 1962, he was appointed to the NCAA Wrestling Rules Committee for the New England states, and Wrestling Commis-sioner of 18 high schools in southeastern Connecticut from 1972-1984. Frank was the line coach of the Coast Guard Academy football team, head coached by Otto Graham, former Cleveland Brown quarterback, and Pro Football Hall of Fame 1962, that played in the Tangerine Bowl in 1963 at Orlando, Florida. Kapral was inducted into the Athletic Hall of Fame at Wyoming Seminary in 1976, and Coast Guard Academy in 1979. He was named ‘Wan of the Year” by New England College wrestling in 1988. Frank authored 2 textbooks for Prentice Hall: Coach’s Illustrated Guide to Championship Wrestling in 1964; and Illustrated Guide to Championship Football in 1967. Kapral rose through the ranks of Coast Guard officers to that of full captain before his retirement in 1984. Frank has been married to his wife Doris Sidelko of Swoyersville for 47 years. The Kaprals reside in East Lyme, Connecticut, and have 6 adult children and 9 grandchildren.