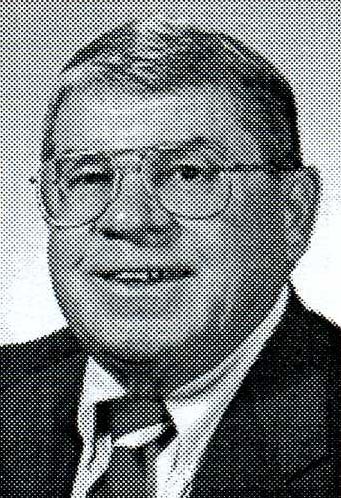 Edward R. Davis is a native of Plymouth, Pa., and graduated from Plymouth High School in 1950. Eddie quarterbacked the Plymouth football teams of 1948 and 1949, and was co-captain of the 1949 team. The 1949 football team was Wyoming Valley Football Conference Champions. Eddie played guard on the Wyoming Valley League Champion 1947-48, 1948-49, and 1949-50 Plymouth basketball teams, which won 68 straight Wyoming Valley League basketball games during that period. He was co-captain of the 1949-50 team. Eddie was named to the Wyoming Valley Basketball League All-Star Team in his junior and senior years, and was selected All-Scholastic in 1949-50. He was also named All-State honorable mention. Eddie played shortstop and was a leading hitter for three years for the Plymouth baseball team. He was co-captain of the 1950 baseball team. Eddie matriculated to Wilkes College in 1950 and was a starter in football, basketball, and baseball for four years. He played quarterback and fullback positions, handled the kicking duties, and was receiver on kickoffs and punts. Eddie was elected co-captain of the 1953 Wilkes football team. He played a guard position in basketball at Wilkes during the four-year period and was elected a co-captain of the 1953-54 team. Eddie was selected by members of the Wilkes faculty, administration, and friends of Wilkes College to the “50’s Decade Wilkes Basketball Dream Team.” Eddie was an outstanding infielder, mostly at shortstop, at Wilkes for four seasons as a starter. In 1952, he was named Wilkes College “Outstanding Athlete of the Year.” Upon graduating from Wilkes in 1954, with a degree in mathematics, Eddie served as a teacher in the Plymouth School District, where he also held positions as head football coach, head track coach, and later became the head baseball coach. Eddie also was the mens’ head basketball coach at Wilkes College for eight years, and led the 1957-58 team to the MAC playoffs for the first time in school history.” In 1994, Eddie Davis was inducted into the “Wilkes University Athletic Hall of Fame.” He was a P.I.A.A. high school football and basketball official, Wyoming Valley Chapter, for more than 25 years. Eddie’s education continued during his career on the graduate level at Penn State University and Rutgers University in the field of Mathematics and Building Construction Management. He left the teaching profession in the 1960’s for the building construction industry. Presently, he is president and owner of Construction Analysis, Inc., a professional building construction management and consulting firm. He is married to the former Lorraine A. Davis of Plymouth and has three daughters, Lisa A. VanWhy, Lorraine A. Alles, and Cherie L. Klinger, and four grandchildren.