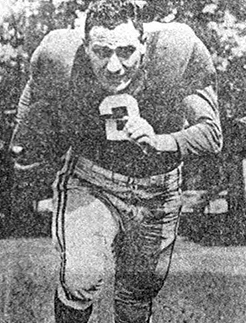 An outstanding All State football star at Pittston High School, Charley Trippi continued his football career at the University of Georgia from 1942 to 1946. As a freshman, his skills drew quick notice of the coaching staff and by sophomore season he became a member of a powerhouse backfield that included Heisman winner Frank Sinkwich. Together, in 1943, they led Georgia to a shot at a national championship in the Rose Bowl. Prior to game day, Sinkwich was sidelined with an injury. Despite the setback, the team walked away with a national championship and MVP honors for Trippi. His next two seasons were interrupted by the war. During his military service, he continued to play football for the 1944 Third Air Force Gremlins football team. He was a first team selection to the Associated Press’ 1944 Service All American team. In 1945, he was designated a future pick by the Chicago Cardinals however, by special agreement, Trippi was allowed to first return to Georgia for his senior year. As a senior, Trippi led Georgia to the Southeastern Conference championship and was selected the conference’s Player of the Year. He then led Georgia to the national championship in the Sugar Bowl. He was a unanimous All American selection and despite finishing as the runner up for the Heisman, Charley was awarded the Maxwell and Walter Camp Trophies as college football’s Most Outstanding Player. As promised, the Chicago Cardinals made Trippi their number one pick in the NFL draft.  Charley headed to the Chicago and became a member of “The Dream Backfield”.  In his very first season, he was named All-Pro and, lead Chicago to the World Title.  Trippi played halfback, quarterback, safety, punted and returned kicks. When he retired, he led the NFL in total offense. He is the only NFL Hall of Famer and one of only three men in NFL history with more than 1,000 yards rushing, passing, and receiving. Trippi was inducted into the College Football Hall of Fame, the Georgia Bulldog Circle of Honor, the Arizona Cardinals Ring of Honor, the Pro Football Hall of Fame and the Pennsylvania Sports Hall of Fame. Trippi was also named to the NFL’s All Decade Team dedicated to the finest players of the 1940’s. The football stadium in Yatesville was dedicated in his honor years ago and his Georgia Bulldog number 62 has long been retired. Charley, at 99 years old now lives in Athens, GA with his wife Peggy. There, he is celebrated as the oldest living number one NFL draft pick, the oldest living member of Pro Football’s Hall of Fame, the oldest living Georgia Bulldog, and one of the best football players ever.