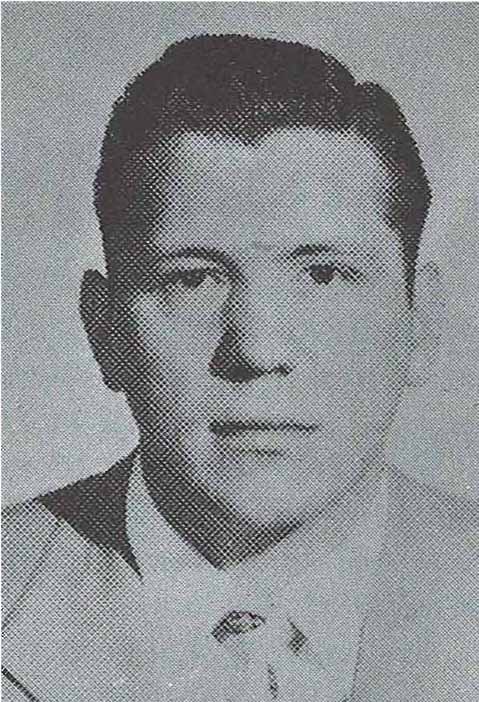 Carl “Red” Meinhold, first came to the attention of basketball fans in Hazleton when he started on the 1942-43 Hazleton High team that won the East Penn League championship and five PIAA playoff games before losing to Lower Merion, 35-23, in the Eastern final. That team, with Meinhold as the fifth leading scorer and top rebounder, finished 22-4. The following sea-son, Meinhold,led the Mountaineers to a 20-6 record and another East Penn League and District 11 title. He was the leading scorer on the team with an average of 12.4 points a game. Hazleton again won five PIAA playoffs under the legendary Hughie McGeehan and after whipping Lower Merion in the PIAA Eastern final 59-31, the Mountaineers had an opportunity to win their fourth state championship. Meinhold set what was then a PIAA record for playoffs with 29 points against Lower Merion, but a ligament injury, suffered late in the game, sidelined him for the state championship game against Duquesne. Without the 6-4 Meinhold, the Mountaineers lost the state title game, 43-35. Mountaineer fans are convinced to this day that with Meinhold in the lineup, the Mountaineers would have won. He was awarded All-State honors by the Pennsylvania Associated Press. After a stint at Long Island University under veteran Clair Bee, Meinhold was signed by the Baltimore Bullets of the Basketball Association of America (BAA), a league that was later to become the NBA.

To this day, Meinhold remains the only Hazleton High graduate to play in the top pro league in the nation. Meinhold and his hook shot immediately caught the fancy of the pro fans. He was voted the most popular player on the team and contributed to the success of the Bullets. He concluded his BAA career with the Chicago franchise by making his own decision to retire from pro basketball on a national level. Meinhold returned to his hometown and continued to play pro basketball. He was a standout with Scranton’s American Basketball League franchise coached by Bernie Sarachek and he also served as a player-coach for Hazleton and Berwick in the Eastern League in addition to playing for Wilkes-Bane in the Eastern League. He was consistently among the leading players in the American and Eastern Leagues. In a community that has produced many outstanding basketball players, Meinhold is rated one of the best ever. Meinhold and his wife, the former Shirley Tait of Hazleton, have five children and one grandchild. He is an executive with the Boscov Department Store chain and they live in Reading.