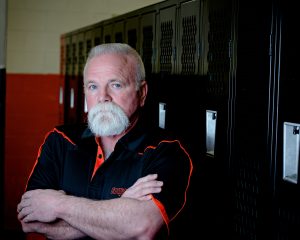 Bill Sexton grew up on their family farm in Jefferson Township, Lackawanna County.  Bill is grateful to his parents Lois and Allen for teaching him the importance of hard work and goal setting.  He is also thankful for their realization of the importance of sports and the life lessons it teaches.  Giving him time away from farm work to participate.
Bill is 1971 graduate of North Pocono High School where he earned 10 varsity letters in Football, Baseball, and weight lifting.  He was elected Captain of both the Football and Weight Lifting teams.
Bill is a 1975 graduate of Bloomsburg State College with a degree in Comprehensive Social Studies.  He also earned a Masters’ Degree in Education in 1977 at BSC.  Bill served as student coordinator of Intermural Athletics for 3 years.

Bill spent 38 2/3 years as a High School Social Studies teacher in the Towanda Area School District.
In Towanda Bill was fortunate to meet his wife of 33 years, Julie,  and to raise his family consisting of his two sons, Ethan (wife Courtney) and Cole, and recent addition, Grandson, Lincoln.
Without their support, his coaching career would not have been possible.  Among Bill’s fondest memories is coaching both of his sons during successful careers in multiple sports.
As a Coach at Towanda, Bill has compiled 40+ years in wrestling, baseball, and football.

Bill would like to express his gratitude to his parents Lois and Allen, his sister Beth, his wife Julie, his sons Ethan and Cole and the 100’s of Athletes and Assistant Coaches who have made his career possible.