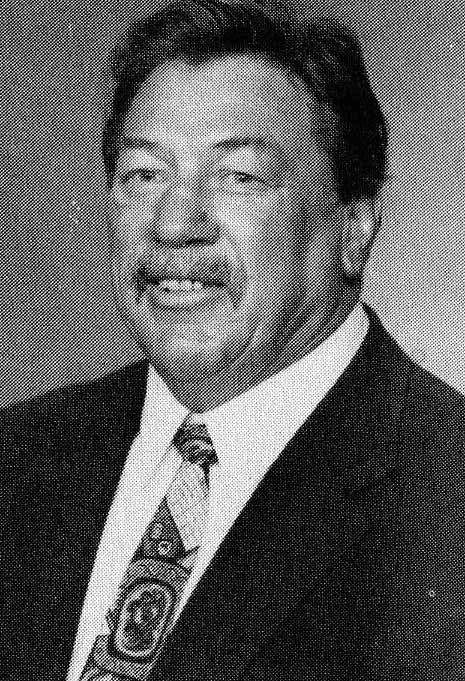 In two sports, football and wrestling, Abe Cohen has made a mark in Wyoming Valley and in national and international circles. As recently as in 1990, the Plymouth High School graduate was named to the Football Hall of Fame at the University of Tennessee/Chattanooga. In 1960, Abe Cohen qualified for the U.S. Olym-pics in wrestling in Rome, but went to play for the new AFL team in Boston as a guard. Some other highlights of Abe’s career in-clude: All-Scholastic and Player of the Year at Plymouth High School in 1950-51, the year the team won the Wyoming Valley Conference football championship. Southeast Conference (SEC) champ in wrestling, heavyweight, in 1954-55. Drafted in 1954 by the New York Giants. Heavyweight champion two years in Armed Services Wrestling. Abe Cohen’s sports career began at Plymouth High School in 1947 when he signed up for freshman football. During his high school career, he participated in football, wrestling, and track. In varsity football,, he played running back. He wrestled at 165 pounds. In track, he excelled at pole vault, discus, and long jump. The first of many awards Abe received was a second place in the Rogers YMCA wrestling tournament. He went on during his high school career to be district champion in wrestling, second place in pole vault, and a member of the Wyoming Valley Conference championship team. As he reached college age, Abe was heavily recruited by major colleges in the south, east, and midwest—among them Alabama, Navy, Notre Dame, Michigan State, Penn, Temple, Kentucky, Miami, Georgia, Rutgers, and Yale. He chose the University of Alabama and transferred to the University of Tennessee/Chattanooga after completion of his freshman year. At the University of Tennessee/Chattanooga, he played end and linebacker in football and wrestled at 191 pounds. In wrestling he took second place in the SEC championship in 1952, first place—at heavyweight—in 1953-54, and first place in 1954-55. In the NCAA wrestling tournament at Cornell, Abe lost to Peter Blair of Navy, who went on to win the NCAA championship and Olympic wrestling medal in Tokyo. During the 1954-55 season, Abe was drafted by the New York Giants. And in his last year at Chattanooga, he played in the Senior Christian Bowl, was selected to the Little All-America Team, a member of the 3rd team All America, and heavyweight champion in SEC wrestling. He graduated from the University of Tennessee/Chattanooga with a bachelor of science degree in education. After graduation in 1956, Abe attended the New York Giants football camp and was drafted into the U.S. Army. As a player-coach at Fort Hood, Texas, his team won the Army championship, and went on to play Bolling Air Force Base at Galveston, Texas, in the “Shrimp Bowl.” He was also heavyweight champion two years in Armed Forces Wrestling. He completed his Anny athletic career as player-coach for football in Frankfurt, Germany, 3rd Anny Division. After service, Abe played as guard-linebacker in 1959 in Canadian Football for the Hamilton Tiger Cats. In 1960, he qualified for the U.S. Olympics for wrestling in Rome but went to play for the new AFL in Boston as guard. He was player-coach of the Boston Sweepers in the semi-pro Continental League from 1961 to 1964. On the home front, Abe has one son, Brad, a teacher and assistant hockey coach in Faribault, Minnesota, and a daughter, Gayle, a travel agent in San Jose, California. Abe is the son of the late Jacob and Sarah Cohen. From 1966 to 1974, Abe Cohen taught and coached in California, specializ-ing in—most appropriately—football and wrestling. And in 1990, he was inducted into the University of Tennessee/Chattanooga football Hall of Fame.