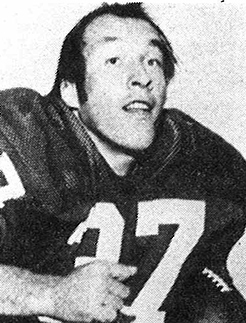 The fifth-leading rusher in Philadelphia Eagles history was Tom Woodeshick of Hanover Township. Known as “Pocono Duke and “Woody,” Woodeshick rushed for 3,563 yards in nine years with the Eagles Woodeshick was an outstanding linebacker and halfback for Hanover Township High School. Woodeshick went on to West Virginia, with the help of Hanover superintendent Bernie McGuire, Jim Moran of King’s College, and Bill Lapinsky, he said At West Virginia, I started as a sophomore and played three years,” said Woodeshick. In my senior year we had the best defense in the country. We had a record of 8-2. In his senior year Woodeshick was named to the All-Southern Conference team. At 6 foot and 215 pounds, Woodeshick was a powerful pro fullback. “I really enjoyed my professional career,” he said. “It was a special year for me in 1968.1 gained 947   yards and was really upset that I didn’t gain 1,000 yards. I remember I had a 60-yard touchdown called back against Minnesota, and I missed one game with an elbow injury. I really wanted to run for 1,000 yards. It was also an honor to be chosen for the Pro Bowl that year.” Woodeshick was the NFL’s third-leading rusher that year, and gained 831 yards the following season. During off-seasons, he was a popular banquet speaker; kept in shape by running, lifting weights, and playing tennis, softball and basketball; and attended night courses at the Wharton School of Finance. Knee problems hurt his career in the early 1970’s, and in 1972 he underwent surgery for the removal of an inflamed bursal sac from his right knee. The Eagles released him before the 1972 season, and he played his final year with the St. Louis Cardinals before retiring. He was a broadcaster for the Philadelphia Bell of the World Football League and wrote a column for the Philadelphia Inquirer for a time. He also coached at Moravian College for two years. Today he is married to the former Marcia Bluestein of Philadelphia and has two sons, Mike, 19, and Karl, a senior at Ocean City High School in New Jersey, where he plays football. Woodeshick returns to the Wyoming Valley quite a bit. “I hear more great things about Wyoming Valley,” he said. “I just might someday come back to live here with the greatest people in the world.”