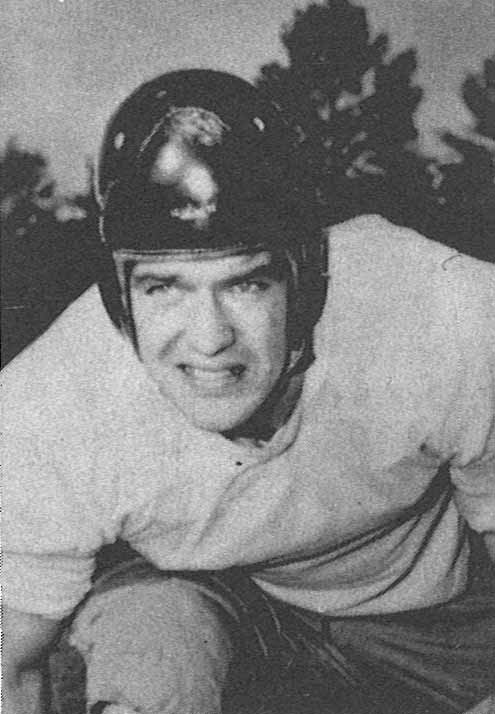 Although Steve Hudacek died over 30 years ago in a tragic plane crash, he is still remembered today as one of the best football players from this area. Hudacek was an outstanding lineman for Plymouth High School in the mid-1930s before moving on to Ford ham University, where he was nicknamed the “Plymouth Rock” by New York sportswriters. Hudacek played under Coach Edward Brominski while at Plymouth and it was Brominski who arranged Hudacek’s enrollment at Fordham. A teammate at Plymouth, John Kovitch, went to Fordham with Hudacek. Some other Shawnee Indian teammates of Hudacek included Tom Stabulis, Ed Sarocek and Mickey Noonan. The late Stephen Hudacek of Plymouth is a part of college football history. The 50th anniversary of the first televised football game, which pitted Fordham University against Waynesburg College, was observed on Sept. 30 and the national media looked back on the greats who played in that clash and who, although unwittingly, helped usher in the era of college football on television. One of those greats was Hudacek, a hard-nosed tackle from Plymouth. His play from 1939 to 1941 earned him in April, 1988, a place in the Fordham University Hall of Fame, where his plaque hangs alongside those of Vince Lombardi, Frankie Frisch, Vin Scully and Wellington Mara. Dubbed “The Plymouth Rock,” Hudacek saw action as Lombardi’s backup in the first televised game, which was held at Randall’s Island in New York and he helped the Rams come away witka 34-7 win over Waynesburg. However, two games later, Hudacek suffered a serious head injury that sidelined him for the remainder of the 1939 season. At first, the injury was thought to be career-threatening, but Hudacek returned to action in 1940, thanks in part to a specially designed helmet. He helped the Rams post a 7-2 record and earns their first post-season bowl bid. In fact, Hudacek played a “key” role in the 1941 Cotton Bowl, though he is hardly remembered as the hero of the game. Hudacek was the “starting kicker” in the days before the “kicking specialist.” He had one extra point blocked and he had another rattle off the crossbar as Fordham lost a 13-12 decision to Texas A & M. The next season, however, Hudacek earned his redemption. His outstanding blocking helped Fordham go 8-1 in 1941, a mark which earned the Rams their second straight post-season bowl appearance. His brother, Dr. Andrew Hudacek of Morristown, N.J., was a teammate of his on the 1941 Fordham squad. Another brother, Michael, is a practicing attorney in Plymouth, the family’s hometown. In 1942, Fordham beat Missouri 2-0 in the Sugar Bowl. Hudacek was instrumental in aiding Stan Retinski’s recover of Alex Santille’s blocked kick for the game-winning safety. Following the Sugar Bowl of 1942, Hudacek enlisted in the Navy Pre-Flight School at Chapel Hill, North Carolina under Commander Jim Crowley, his football coach. During Steve’s military service, he received the Bronze Star for bravery – knocking out a Japenese destroyer.

Following his Navy discharge in 1946, Steve enrolled at Georgetown School of Medicine in Washington, D.C., graduating in 1950. An internship was served at Wilkes Barre General Hospital until July 1951. From there Steve proceeded to Philadelphia at Temple, where he studied with Dr. Bailey of cardiovascular pioneer research. Steve entered the practice of surgery in Wilkes Barre in 1955 and until his untimely demise on March 4, 1969, carved out a busy practice of surgery. Hudacek died in a tragic plane crash in Puerto Rico. Also killed in the crash were Hudacek’s wife, the former Ceal Dembrowske of Askam, his brother, Joseph, and Joe’s wife, Vera. He is survived by two daughters, Hollis and Rennie and one son Steven as well as four grandchildren. In April 1987, Hudacek was inducted into the Fordham College Football Hall of Fame.