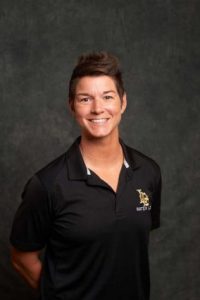 Shana received 7 National YMCA age-group top 16 rankings, including being ranked number one in the nation in 1997 for 11-12 year-olds in the 50-yard Freestyle with a time of 24:97 and won two YMCA State Championships.
At Wyoming Valley West High School, Welch achieved All-America recognition in the 50 (23.77) and 100-yard (51.74) freestyle events. Her 14 years of competitive swimming helped her to become a four-time conference swimmer of the year receiving 15 PIAA District II medals, winning four letters each in water polo and soccer and one in track & field making her a four-sport letter winner. Shana helped lead her water polo team to the school’s first ever State Championship in 1999. She was a four-time all-state and four-time all-American in high school while being named the State’s Rookie of the Year her freshman year and State MVP her Senior Year. Her All-American status in swimming and water polo made Shana the first female dual All-American at her school. Welch was also a member of the USA Women’s Youth National water polo team during this time.

From 2004-2007 as a student-athlete at Michigan, Welch established herself as one of the best players in Wolverine water polo history. Establishing new program records in goals and points she was CWPA Rookie of the Year in 2005, served as team captain in 2006 and 2007, was a three-time MVP of the CWPA Western Division and a nine-time CWPA Player of the Week. She helped lead U-M to the 2005 CWPA Championship, NCAA berth and four consecutive division crowns. A member of the U-M all-decade team, a third team All-American selection in 2005, and a two-time honorable mention All-American in 2006 and 2007. She was recognized for her outstanding career in 2016 as a CWPA Hall of Fame Inductee.

Welch excelled outside of the pool, receiving the University of Michigan Athletic Academic Achievement Award in 2006 and 2007 as well as the Bob Ufer Sr. Athlete award in 2007.

After graduating, Welch played professional water polo in Australia before joining Bucknell University as an assistant swim coach. She joined the Harvard University staff from 2009-2010 as the assistant coach before heading to Greece to play professionally again.

In 2015 Shana joined Long Beach State as the Women’s Water Polo Volunteer Assistant Coach and in 2019 moved to Assistant Coach. In 2020, Welch served as the Associate Head Coach and in June 2020 was hired as the first dedicated coach for the Women’s program since 2008. She is in her 8th season with the program.
Welch also completed a Master’s degree in Coaching and Athletic Administration at Concordia-Irvine in 2019.