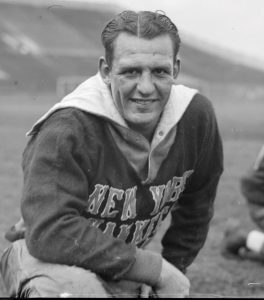 Harold Edward Grange was born on June 13, 1903 in Forksville, Pennsylvania, one of 4 children to Lyle and Sadie Grange.  His father was a brawny lumberjack and foreman for three lumber camps in Pennsylvania.  When his mother died of typhoid fever in 1910, his father moved the family to Wheaton, Illinois to live with relatives.  His father worked hard and became a policeman and eventually the police chief for Wheaton, Illinois .

At the age of 13 years old, Grange worked L.C. Thompson Company. He would deliver 75lb blocks of ice to every home, working every summer during his high school and college years. Grange is quoted saying,  “Working the ice route made me tough as nails, making my shoulders, arms and legs strong and developed my wind”.  He quickly got the nickname as “The Wheaton Ice Man”.  He attended Wheaton High School and excelled at every sport,  earning 16 varsity letters in football, baseball, basketball and track.

In 1922, Grange attended the University of Illinois.  In his first collegiate game, he scored 3 touchdowns against Nebraska.  He drew national attention for his performance on October 18, 1924 against Michigan.  Grange returned the opening kickoff for a 95 yard touchdown and scored 3 more touchdowns all within the first 12 minutes of the game and then threw the ball for his 5th touchdown.  Because of his blinding speed on the field, got the nickname “The Galloping Ghost”.    He was a three-time consensus All American halfback and in 1923 led Illinois to a national championship.  In 1924, was the first recipient of the Chicago Tribune Silver Football Award as the Big Ten Conference’s most valuable player.  After Grange’s final game at Illinois, they retired his #77.

In 1925, Grange left college early to play professional football.  He was the first football player to hire a professional agent and to sign the largest professional contract.  As a Chicago Bear, Grange’s salary was $100,000 and a share of the gate sales.  On Thanksgiving day, 36,000 fans came to watch his debut and ten days later, the crowd grew to 73,000 screaming fans. Grange was taking the nation by storm, playing football, acting in movies and plays.  He was two time NFL Champion – (1932-1933),  two time First-team All-Pro (1930-1931), The NFL 1920’s All-Decade Team, and made the list of 100 greatest Chicago Bears of all Time. Grange was instrumental in the popularity and the establishment and validation of the Nation Football league. When Harold “Red” Grange retired from the Chicago Bears, they retired his #77.

In 1934, when his playing career ended, George Halas wanted Grange for head coach of the Chicago Bears, but he declined the position.  Halas made him the backfield coach, a position he held until 1937.  When Grange left professional football, he became a sports announcer and motivational speaker.  In the 1950’s started his broadcasting career for CBS television announcing the Chicago Bears games.

In Grange’s personal life, in the late 1920’s he dated Helen Morrissey Flozak. The two never married, but had one child together.  A daughter, Princess Rosemary Morrissey, born March 1st. 1928.
In 1941, he married Margaret Hazelberg, the couple had no children. On January 28, 1991 at the age of 87 years old, Harold Edward Grange passed away. He leaves behind a granddaughter, Ms. Rosemary Maria from Chicago, Illinois.

In honor of Grange, his hometown of Forksville, Pennsylvania has a Harold “Red” Grange historical marker along route 154 and the University of Illinois erected a 12 foot bronze statue of Grange that stands in front of the Memorial Stadium.