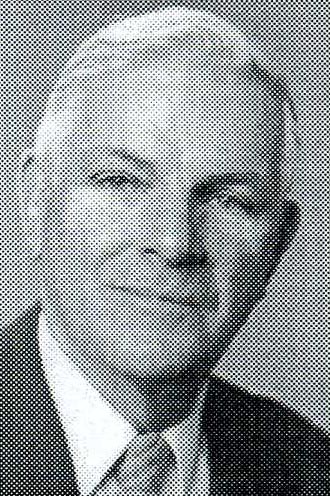 George W. Stanton is a 1941 graduate of Honesdale High School, where he played on the basketball and tumbling teams.

George was in the U.S. Marine Corps. from 1943-46, serving in the Pacific Theater, notably in the invasion of Iwo Jima.

He went on to Bucknell University where he was on the wrestling team and captain of the team in 1948-50. He was undefeated in his senior year, and received the Outstanding Senior Wrestling Award in 1950. He graduated from Bucknell in 1950 with a B.S. in Com­merce and Finance.

George was named a member of the Sports Wall of Fame in 1960, and member of Wrestling Sports Hall of Achievement in 1989. He was inducted into the Wayne County

Sports Hall of Fame in 1994. He has been a long-time member of the Bucknell Grappler’s Club.

He is the founder and presently retired from the Stanton Office Equipment, now in the capable hands of his two sons. He has been active in civic activities, including the Honesdale Borough Council, the Wayne County Planning Commission, American Cancer Society, and past president of the Honesdale Jaycees.

He is married to the former Sally Baumgardner, and has two sons, David and Frederick.