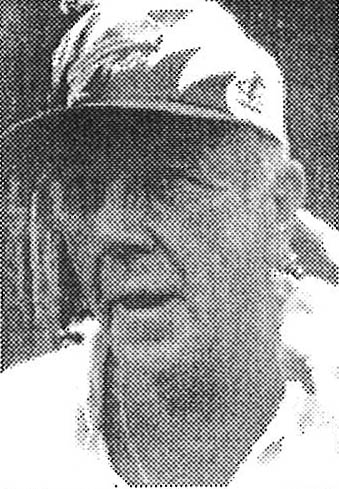 Daniel Sekanovich’s football ability as an offensive and defensive end for three seasons at West Hazleton High under head coach Jim “Gassy” Horn, earned him an athletic scholarship to the University of Tennessee in 1951. He played on the 1951 Tennessee national championship football team and also played with the Vols. in the Sugar Bowl and Cotton Bowl. He served in the U.S. Army from 1954 to 1957 and continued his football career in the service. He was named to the All-Army team. Following discharge from the service, he was named head football coach at Southington High School, where he served from 1957 to 1959. Sekanovich started his college coaching career as defensive line coach at Susquehanna University in 1960 and he remained there until 1962. He was also defensive line coach at the University of Connecticut (1963-67), University of Pittsburgh (1968), U.S. Naval Academy (1969-70), and University of Kentucky (1971-72). In 1973, Sekanovich switched to professional football when he was hired to coach the Montreal Alouettes’ offensive line. During Sekanovich’s four seasons with the Canadian Football League team, the Alouettes captured two Grey Cups, one in Vancouver, British Columbia, and one in Calgary, Alberta. Sekanovich joined the New York Jets’ staff under head coach Walt Michaels in 1977 as defensive line coach. During Sekanovich’s six seasons with the Jets, he coached the “New York Sack Exchange,” coached in the 1983 Pro Bowl in Hawaii, and coached in the AFC-NFC Championship game. In his first season with the Jets, the defensive line, led by Temple University product Joe Klecko, recorded 26 quarterback sacks, an increase of 10 over the previous season. From 1986 to 1991, Sekanovich was Don Shula’s defensive line coach in Miami. He coached in American Bowls in London and Tokyo. In 1992, Sekanovich joined Mary Levy’s Buffalo Bills staff as defensive line coach. The Bills played in two Sugar Bowls and three American Bowls, one in Berlin and two in Toronto. As a result of Levy’s retirement following last season, Sekanovich, and other assistant coaches, were released by the owners of the Bills. Currently, Sekanovich plans to sit out the coming season and return to coaching in 1999. Ever since West Hazleton High’s Wildcats won the Eastern Conference Southern Division championship in 1947, Sekanovich has been involved with mostly winning programs on all three levels, high school, college and pro. He and his wife, Delores, have two children. They reside in Depew, New York.